By Garett on December 27, 2016 on Reviews, 8 More
Tweet
No Comments Featured Review

Dishonored 2 is the second installment of a pretty unique action-adventure game with optional stealth elements, supernatural abilities, and first-person shooter mechanics. I am a big fan of the first Dishonored and was ecstatic over the announcement of the continuation of the series. Of course, with this excitement came a high level of expectation of what the game would be, and I can say that it lived up to much of those expectations.

Dishonored 2 starts off in the familiar setting of Dunwall Tower and it’s been a little while since Corvo Attono, the Royal Protector, donned his mask in revenge for the death of his Empress and lover, Jessamine Kaldwin. Emily Kaldwin, the current empress, is having court for the anniversary of her mother’s assassination. During this ceremony, the Duke of Serkonos enters the throne room with soldiers and killer robots and declares that another woman is the rightful empress. Delilah Kaldwin, half-sister of the late empress, appears and orders the death of both Corvo and Emily. Depending on which protagonist you choose to control, one is turned to stone and the other escapes. This begins your bloody path to revenge, your stealthy non-violent approach, and/or everything in between to save your family.

One of the most impressive aspects of this game was the creativity involved in the locations. Compared to Dishonored, the locations in this game are far more unique, memorable, and fun. The main continent that this game takes place on is Serkonos. Serkonos is the homeland of Corvo and has not gotten any better since he left. Serkonos, in general, is very similar to the streets of Dunwall that Dishonored players are used to, but the locations you visit within it are very unique.

Emily Kaldwin and a Clockwork Soldier 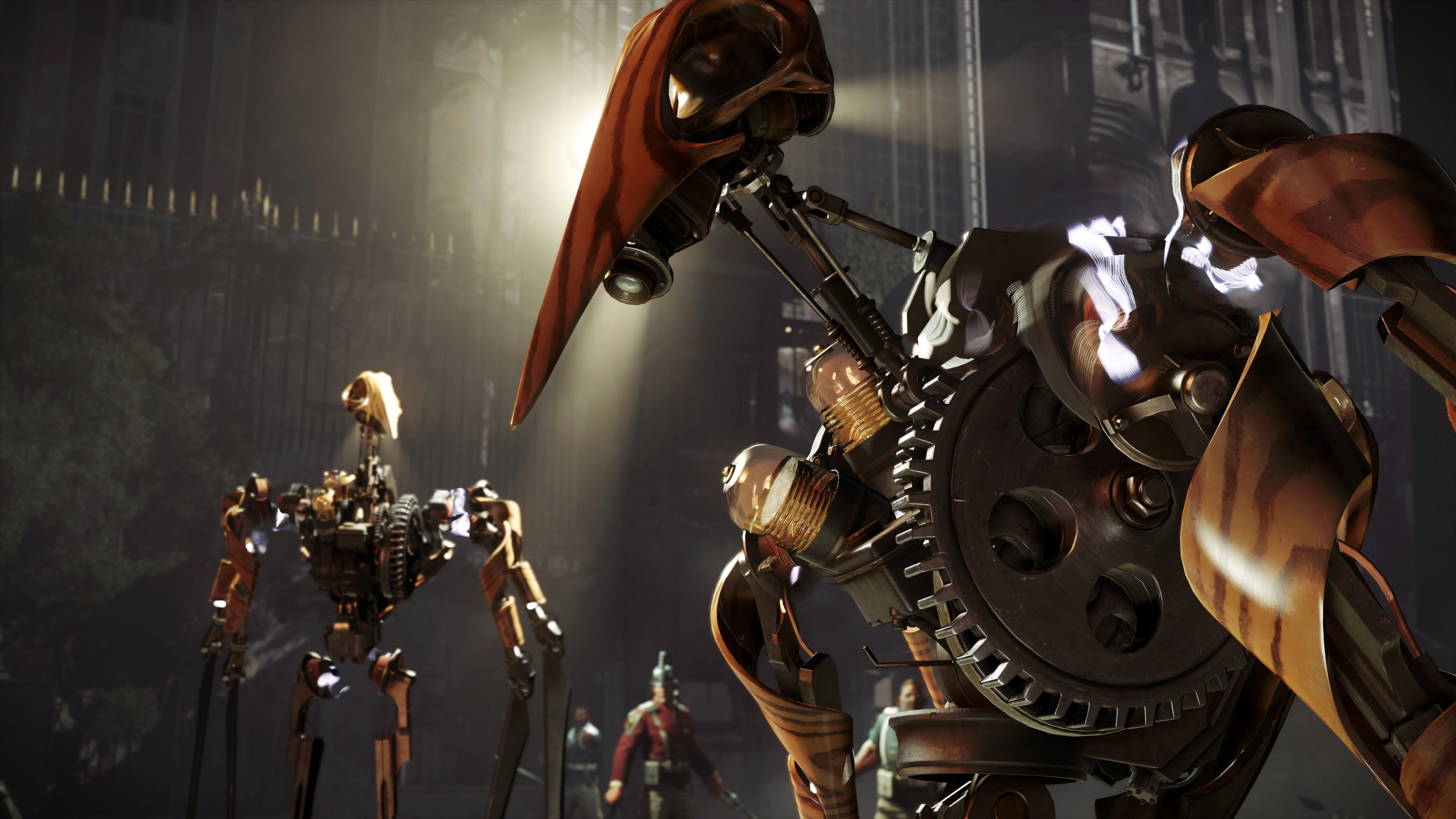 You control either Corvo or Emily in a first-person style of gameplay. In one hand you have a sword, and with the other you can use various weapons and abilities.

One my favorite aspects of the game is the variety of ways I can complete missions; you can use all these abilities or none of them to accomplish the objective, which is one reason I like the Dishonored series. This leads to another familiar aspect of the game: Your actions have consequences. A mission’s results are measured at the end of every level to determine a chaos rating, which affects what type of future/ending the game will have.

At the end of every level, you get this summary of how you performed

These different endings, abilities, weapons, and choices allow for quite a few replays. Even as I played through the first time I was overwhelmed with the different paths, loot, and choices to make. You can spend quite a bit of time collecting and exploring to find the way you want the story told.

Blood flies and a Nest Guardian

In conclusion, Dishonored 2 is a game where you can be a stealthy ghost that sneaks through the shadows and neutralizes their targets before vanishing without a trace, a masked killer on a bloody rampage that creates piles of bodies in order to reach their target and cut them down, or anything in between. I personally enjoyed this game, but not as much as the first Dishonored. I believe the reason for this is that you can’t ever truly relive an experience. Dishonored was a great game and this one follows in many of the same footsteps, just going a little larger with more options – which in reality is what a lot of gamers want. More choices, more routes, more variety, and just more of everything that I loved from the first game makes Dishonored 2 a good sequel to the franchise.

Perfect stealth, or naked violence? With an array of supernatural abilities, it's completely up to you!

Content is generally suitable for ages 17 and up. May contain intense violence, blood and gore, sexual content and/or strong language.